I Travel In My Own Way 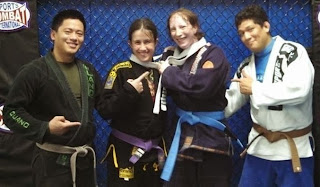 It's been two years to the day since I started at Ronin Athletics. With time off due to injuries, surgeries, vacations, tattoos and whatever else along the way, I've been training about 19-20 months now, but I officially started at my gym on October 4th, 2011 and it's been a great second home ever since. When I stepped onto the mats that Tuesday night, I sure as hell never imagined it would become such a big part of my life, or that I'd still be there two years later.

When I first started training, I did almost entirely nogi grappling. Minimal kickboxing, no fancy outfits...I only picked up a cheap blue Fuji and began to grudgingly do one of the gi classes after a few months of being hassled into it. At the time, I vehemently insisted that gi "just wasn't my thing" and was therefore totally unconcerned with the whole concept of ranks and belts. HAH! The innocence of newbies. I don't know exactly when things changed, but somewhere along the way I became all about the gi (yes, Liz was super smug about it) and kicked up my efforts to really focus on the details, improve my technique and actively work towards my blue belt.

It's been quite a journey. One of my favorite things about grappling is that it's not the same for everyone; each person learns in their own time, in their own style. During one class, we were drilling a relatively easy spin around the back and something in my brain short circuited. Instead of doing step 1, 2, 3, I kept doing step 1, and then some bizarre hopping, flying motion that magically landed me at step 3. I mean, it kind of worked, but my inability to do it the usual way was a total mystery. When I asked Christian to observe and showed him my version of the move, he smiled, shrugged, shook his head and said, "What can I say? You travel in your own way." 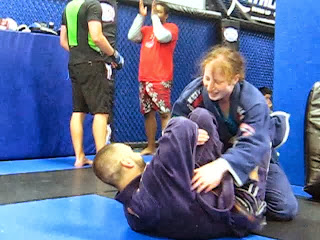 Needless to say, as an eccentric artist, this saying applies to every aspect of my life and immediately became one of my favorite quotes. I now use it all the time. Besides, when it comes to jiu jitsu, everyone has to find their own path based on what clicks with the mechanics of their body. Especially with my defective hand, I often have to find my own way of doing things, adjusting certain moves to work better for me. Carlo in particular tends to give me adapted versions of grip-oriented moves, which has saved me from total failure with many a technique over the last two years.

In the early days, most of my partners were pretty big guys and I didn't get a lot of time to work with Liz or the smaller dudes, so I developed a primarily defensive game. Over the first sixth months, I went from being crushed and submitted every few seconds to being crushed and submitted only once in a while by the same people. Forget tapping anyone out; if I could just frustrate my partners enough by escaping and defending for most of the round, I considered it an epic win.

Once I got to a point where I could actually survive, I started trying to sneak in submissions and get better at transitioning from defensive to offensive positions. Mount became my go-to place and armbars became my focus. Liz is something of an evil armbar god so I'm always trying to learn more from her. I found my preferred guard passes (sexy creepy smash pass FTW) and the sweeps that worked best for me and started to develop my own game. It's an ongoing process that's always changing, but it's slowly coming along. I've also started rolling harder instead of just kicking back for the lazy flow roll that used to define my groundwork, and it's made a real difference not to mention certain training partners very happy. Whenever we have a good, hard roll, Liz gets that maniacal smile on her face and enthusiastically shakes my hand and thanks me afterwards.

The funny thing is, I've been working extra hard since I got my 4th stripe earlier in the year and had this borderline obsessive gotta wreck it, gotta get my blue belt, any day now attitude for a good few months before finally realizing how stupid it was to be focused on that instead of just doing what I needed to do. Literally the week after I stopped thinking that way and decided that I would never get promoted (yes, I admit it, it gets a little dramatic inside my head), I got my new belt. My recent decision to stop waiting for it just made it that much more unexpected and surprising. 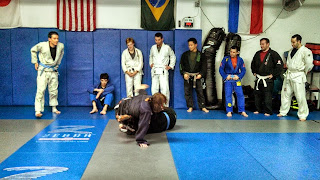 I also assumed that when I did eventually get promoted, it would be as part of a group, so I was completely taken aback when, after a good, hard class, Christian told everyone to grab a drink and line up against the wall. I thought we were doing King of the Hill (my nemesis) until he tossed down a blue belt, called me to the center of the room and said "21 minutes, go!" I had to roll with everyone for a minute each, and dammit they were going hard; or at least the white belts were; the blues and purples were, for the most part, being relatively nice and not trying to kill me, and Christian and Carlo gave me a break and let me sweep and armbar them near the end.

I've had long, intense rolls before but I've never done an Iron Man for that long with everyone standing around and watching. It was exhausting and awful but I made it through to the end. At least I didn't get submitted until Liz tackled me from behind and proceeded to gleefully tap me out over and over in rather brutal ways. It was an ass kicking with love, though, as I am now the second female to ever get promoted at our gym, and it felt fantastic. I damn sure plan to keep working my ass off and hope to earn my purple belt someday...at which point Liz will undoubtedly be a brown or black belt and still making me look stupid. I look forward to that day and in the meantime, I'll continue to learn new things, get better at what I already know, and enjoy absolutely every second of it.
Posted by Reese at 12:56 PM 5 comments:
Email ThisBlogThis!Share to TwitterShare to FacebookShare to Pinterest
Labels: BJJ, progress
Older Posts Home
Subscribe to: Posts (Atom)

Email me on gmail; username is tigersjunkyard