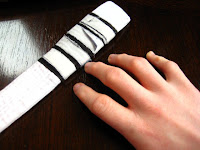 I know I've dropped off the map for a while when it comes to maintaining my blog, but in my defense I'm at the gym 4-5 times a week and it's hard to find time to come home and then write about it. I didn't mean to disappear either but finding a happy balance has never been my forte.

Luckily for all of you, I have new things to write about. For example, I am now a 4-stripe white belt and have long since been converted to primarily training with the gi (remember how I once insisted that I'd never EVER be into gi, because nogi was "the shit?"...yeah, I'm over that phase; give me a gi). I will write more about all that soon but in the meantime, I wanted to address an irritating article that I read by a black belt instructor in faraway Idaho.

The article, which has received major backlash due to its blatant sexism, is titled "Can Women Really Handle Brazilian Jiu Jitsu?" and one of the saddest things about it is that its author doesn't even seem to realize how chauvinistic he actually is. I love my gym and the people I train with so much, and am so comfortable there, that I constantly forget there are gyms run by people who just don't "get it" when it comes to women grappling...or doing any contact sport for that matter.

When I first started, I was at a clear disadvantage. I was the only girl in most of the classes. I was totally out of shape. I was shorter/lighter than most of my training partners. I had no idea what I was doing. And to top it all off, I have a slight handicap - my right hand doesn't work properly, and has no opposability, so I can't easily grab or hold onto things the way everyone else can. And yet, I never actually felt any of these disadvantages (aside from being out of shape but you know...that's why I was there) because the people at my gym never made them a problem. My first class, I was paired up with another new guy, taught the same way as him, expected to do all of the same things as him, and never babied or treated like "the girl." On my second day, when I was wondering how the hell to lift a heavier guy clear off the ground with one hand that didn't fully work, the head instructor came over and yelled "No excuses! What would Jean Jacques Machado do?"

Now imagine that, instead of treating me like every other student, they had gone out of their way to give me extra attention, be it intentionally or inadvertently negative ("don't worry, we'll take care of you because, unlike the men here, you need special treatment")...well, I sure as hell wouldn't still be doing jiu jitsu a year and a half later because I would have felt singled out not as "the new student" but as "the new girl."


This is why Keith Owen's article is an epic failure...because he has no understanding of this most basic distinction. Instead of genuinely seeking advice or starting up a discussion on how to improve his female membership, he presents the situation as a problem with the women themselves. Instead of asking "what am I doing wrong?" he is saying "Well, it's not me, it's them!" And that immediately tells most readers all that they need to know. I have seen articles from guys before asking how to improve female membership at their gyms...and those articles have been inspiring. But this guy is doing nothing more than whining and blaming it on the chicks, and completely failing to recognize the many hypocrisies within his little rant. Julia wrote a great reaction article here, where she even goes so far as to rewrite part of his post, substituting "students" and "white belts" in place of "women"...and it works much better. But this is my own response to him:

Keith, in spite of insisting multiple times that you welcome women and are not biased against them, everything about your point of view is sexist. Since you seem completely oblivious to this fact, here are some examples:

The article title itself. Talk about ignorant generalizations...a genuine discussion would not have used an inflammatory title like this.

<<They will even come in and DEMAND to try it out.  I politely let them know what BJJ is and what it's all about up front.>>

So they come in and DEMAND to try out grappling without knowing what it is? They walk into a room full of men and don't realize from the start that they'll be rolling around with their faces in sweaty dude crotches? Doubtful. MAYBE once in a while I can see that kind of misunderstanding  - on the parts of both women AND men - but it's rare.

<<My guys are very nice, respectable gentlemen (some schools are not)  and treat the ladies with respect (or I’ll kill them)>>

Well, are they "gentlemen" to each other, or just to the women? Because if you're trying to promote the fact that they're being "good men" instead of "good teammates" then you're already doing something wrong. 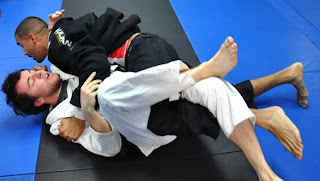 Which is it? This doesn't sound like equal treatment to me. This sounds like you are coddling them and trying to prepare them to "work up" to rolling with men. But...many guys may at first feel a bit awkward about getting into such positions with other men. So do you habitually let your male students know that you understand it can be uncomfortable to be in such close proximity with another man's junk, and that they can build up to it and only start grappling with other men when they're comfortable doing so? If not, then this protective attitude towards your female students is insulting, and you are most definitely NOT treating them "like everyone else." You are singling them out and implying that they need extra care to do the same basic things the other students do.

<<The ladies always stay for a short time but they ultimately quit.>>

There are female practitioners of all belt levels, all over the world, so instead of generalizing and acting like "the ladies" of your gym speak for "the ladies" of gyms worldwide, perhaps this should indicate that the problem is not with "the ladies" but is in fact with YOU.

<<Some of them have gotten pregnant>>

Ugh, really? I've known of far more men who've left or taken time off for family than women who "get pregnant" and quit. Again, sexist and ignorant. Also, some women - just like men - with new babies on the way or in their lives, may take time off and then return later. It's not a woman thing, it's a "person with a family" thing.

Well, obviously not. But somehow, they manage to get blue, purple, brown and black belts from plenty of other schools.

<<I have given out a number of blue belts to women as a matter of fact.>>

So? I don't understand...do you want a cookie or something? If they earned it, why boast about it like you're doing a public service? If they're blue belt level athletes, then that's what they are.

<<It then makes me want to do a  male only class because we don’t want to waste time on someone who is just going to quit even though we are excited to have her and we try to take care of her and make her feel welcome.>>

So you're saying NO ONE in a male-only class would ever quit on you? How do you know that one of the men you are "wasting your time on" won't just bail later, like they often do? Or that the one woman might last longer than some of her male teammates? I mean, again, which is it? Are you excited to have the female students and are you making them feel welcome or do you feel like you're potentially wasting your time? Because if it's the latter, you can bet that attitude is projecting loud and clear, even if you're not conscious of it.

<<My male students are usually married and take a bit of a risk with their spouses by wrestling around with the opposite sex.>>
<<Your significant other has to be comfortable with you being in a class full of men>>

Double standard much? If someone's girlfriend or wife can't handle them rolling around with other hard-working ATHLETES, regardless of gender, then that is THEIR problem to sort out at home, not the woman's. I roll almost entirely with men, many of whom are married or otherwise in relationships...and I don't spend the seconds in between attacks, submissions and escapes wondering if we might hook up. I'm a little too busy trying to not, like, die or break an arm. If their significant other is that jealous and insecure, they should probably crawl into a hole and cry about it.

<<But I always seem to accept women into the fold and try to do my best hoping that they will be the kind of person that can handle the challenge of Jiu-Jitsu.>>

Why is this statement about women? PEOPLE in general have trouble when starting out. They find out they're not tough enough, or that it's too challenging. This is not, like, a "girl thing." Yet your attitude says it is. 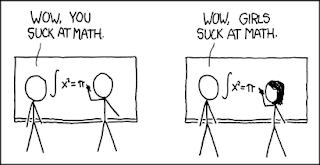 <<I just say “I will do my best to take care of you and make your experience a safe one while you’re here but you need to look internally to see if you can handle wrestling with men.”>>

Okay, so instead of welcoming women to the gym like any other student - which you keep claiming is the case when it's clearly not - you burden them with the task of proving to you that they can stick it out. Basically, they come in with negative points. Well, it's no wonder that women don't want to be at your gym when you're throwing them all into this immensely sexist, generalized group of "womenfolk" instead of treating each and every STUDENT who walks through your door as...what? That's right, a STUDENT. A unique individual, who may or may not be the same as any other individual who's strolled into your gym. You clearly make it about gender from the start, and it's not surprising that they're picking up on it and bailing. For all you know, they didn't quit jiu jitsu...they just left your gym and went to train somewhere else where they were seen as students instead of as females.

<<Remember ladies it ain't easy but stick with it.>>

To be honest, you have no business trying to present a challenge, motivational message or genuine discussion when you clearly don't know the first thing about women in jiu jitsu. I'm concerned about your attitude not as a person but as an instructor, and your willingness to make broad assumptions about all women who walk into your gym when you clearly don't have preconceptions about male newbies even though I'm guessing plenty of men have come and gone at your gym over the years too.

Basically, I recommend that you get over yourself and haul ass to a gym that actually knows how to treat its female members, then get back to us once you've worked out your obvious issues. Thanks.
Posted by Reese at 1:36 PM
Email ThisBlogThis!Share to TwitterShare to FacebookShare to Pinterest
Labels: BJJ, progress, rambling

Email me on gmail; username is tigersjunkyard